EVERYONE knows T-Redd. You can always catch her mingling with the librarians, faculty children, freshmen, seniors, and everyone in between, but how well do you really know your head monitor?

Our fearless, knock-knock-joking and happy-birthday-singing leader, Taylor Redd, was born in Boca Raton, Florida, raised in Del Rey, and now lives in Charleston, but many of you may not know about her tropical hiatus from the southeast. For the second semester of 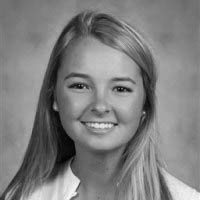 her first grade year until the end of her first semester in second grade, T-Redd and her family put their life in Florida on hold, and ventured out to Marsh Harbour in the Bahamas. At Cyber Learning Center in Marsh Harbour, young T-Redd was the only first grade girl in classes consisting entirely of third grade boys. Nonetheless, she made lasting friendships with people who taught her to be more adventurous, widened her perspectives, and temporarily converted her into a tom-boy. Upon her return to Florida, she picked up where she left off — aspiring to be a pastry chef, religiously watching Cake Boss, begging her mom to buy fondant for her own cakes, and baking meringues. Let’s hope there is a baking major at Yale!

When Taylor joined the EHS community as an enthusiastic freshmen, the upperclassmen boys immediately pegged her with the nickname “T-Redd,” and never failed to shout it out when they passed her in the halls. Though the name remains unchanged, T-Redd has grown significantly over the past four years. She says she has “learned to worry less,” and to be satisfied with her best efforts. She once juggled being constantly concerned with “doing everything right,” while also attempting to be unbothered by judgment for “this type-A mindset.” Since then, her responsibilities have been spread thin, and while continuing to do her best, she has transformed that mindset and accepted that judgment and mistakes are inevitable.

But how does she do it all? Taylor is able to manage her responsibility of head monitor on top of being an editor-in-chief of the Daemon, volleyball captain, writing center tutor, Science Olympiad participant, and track runner (the list goes on…) because she is genuinely energized by all of her activities and classes. It is evident that Taylor immerses herself into everything she sets her mind to, and it is her authentic passion that propels her forward when it seems impossible to not get burned out.

When Taylor has time to breathe, she is most likely either watching rom coms or listening and laughing to audiobooks by Tina Fey or Tiffany Haddish. She says that their humor helps her “destress and escape from the seriousness of the world.” As a junior, Taylor was almost always singing along to Hamilton music when lounging in her dorm room, but according to her roommate Erin Phillips, she has recently switch over to playing mellow/chill music. Erin disclosed that, “Taylor is actually a good singer but fake sings bad while music is playing in the room.”

Taylor loves Episcopal for its uniquely intimate and friendly atmosphere, and especially appreciates that “when you seek out support, you know you will receive it from your peers and the faculty in the most genuine form.” Though sad to graduate, Taylor is eager to take on New Haven, where she is most looking forward to “being exposed to the different cultures and backgrounds that I experienced at Episcopal to the Nth degree,” and having her mind completely changed in virtually all realms of life.

Knock knock… Taylor Redd’s glistening future is at her door! This woman of many nicknames (Teddy, Theodore, T-Redd… to name just a few) may be leaving EHS, but her legacy will permanently exist on the Holy Hill.