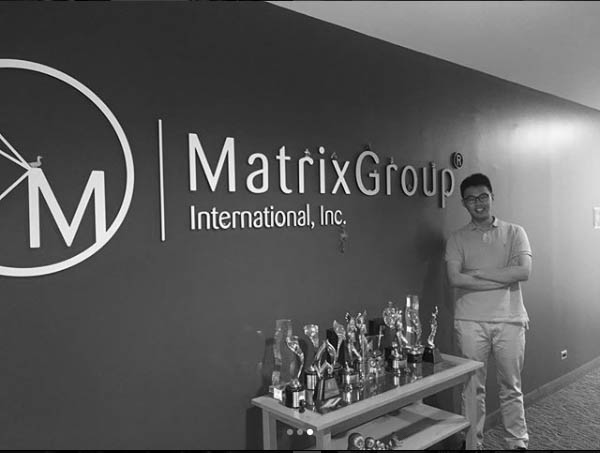 Albert Jin ’18 poses at the entrance of his externship, MatrixGroup.

My eyes drifted to the bottom left corner of the screen for one last time; 3:55, it said. Only 5 minutes and 4 more days left and it’s all over. I grabbed my security swipe and the perfunctorily-written notes, hurrying out of my cubicle to catch the 4:04 bus. Yes, the bus service has been more precise than I thought. “See you tomorrow, Renee! Have a nice day.”

Downstairs, Clark Street Grill has emptied out at this hour. Across the street, the Hyatt looked as monstrous as always thanks to its unbearable brutalist façade. Crystal City in general is heavily plagued by those dreary 1970s office buildings that almost always denote humdrum, stress, and of course, the lack of taste. Every morning I tried to ignore those monolith-like buildings, but at 4:00 in the afternoon I really couldn’t care less. The last time I breathed in fresh air was 7 hours ago, so my priority was to spoil myself with the gift from the week-long thunderstorm. I took a deep breath, and at that instantaneous moment, my thought took a nice little break from my routine. Streptomyces, I thought, I saw it on an article this morning.  Apparently, the rain has lasted long enough to convince journalists that people would be interested in learning about the bacteria that is responsible for the after-rain smell.  Yes, I was indeed very interested, but shoot, I spent too much time thinking about the bacteria. I would probably miss the bus.

I’ve never missed school so much. You might think it’s my nerdy side that creeps into my mentality, but that’s really not the case. I love the word “routine” because it gives me a sense of control. The unexpected often ruin my carefully-crafted plans, so I don’t like them. After four years, school has long become a routine and I totally enjoy it, but school is anything but a routine compared to work. Wake up, grab a lunch bag, get on the bus, stare into the screen for 3 hours, eat a sandwich, stare into the screen for another 3 hours, get on the bus, back to school—it never changes. To make the matter worse, my lack of college degree immediately categorizes me into “unskilled labor,” so my job consists of nothing more than making spreadsheets, graphs, and exporting data. There is no joking around with other students and teachers. There is no walking through campus and befriending the squirrels. There is also no excruciatingly long community meeting announcements. There is only staring into a prehistoric computer screen and switching between all the tabs.

So, while you still can, enjoy the routine of Episcopal. You will soon realize how much you’ll miss something as trivial as walking to another classroom between classes. While I believe not everyone’s job is as stationary as mine, there is no doubt that the diversity of “routines” is drastically cut back. At work, the process becomes less important, and in replacement is a frantic push toward achievements and profitability. So, I’m glad there are only two days left at this point, and I’m even more glad that there are another four years of fabulous routines waiting for me.