You’ve probably heard the story of Peter Pan. If you haven’t what was your childhood? It’s the infamous tale of a young boy who never grows up and longs for adventure. Episcopal theater is here to bring you that same tale only with a few twists, and it’s in the woods…but we’ll get to that. The spring play entitled Peter/ Wendy written by Jeremy Bloom is all the bones of the classic Peter Pan with a new and exciting take. Peter, played by junior Christian Hudspeth, whisks Wendy Darling, junior Savanna Zumbado, into the world of Neverland. There they go on adventures meeting mermaids, fairies, and Tiger Lily the Perennial Flower, played by senior Maddy Warrell. In the end they face Pan’s nemesis Captain Hook, senior Julia Messenger. “I like playing roles outside of my normal casting type” Julia says, “playing villains is so much fun because I find myself really sympathizing with my character and actually rooting for them to win” You can see Julia in the play embodying the character of Captain Hook while riding in the Jolly Roger (a world market shopping cart for our intents and purposes).

To add even further to the immersive theater experience the show will be performed outside in our very own Laird Acres. You must be thinking “How could a show ever be put on out there? There’s no stage, no lights?” Well, this year’s spring play cast and crew have made it happen. With minimal set and out of the box lighting design, by Mr. Wes Reid, Episcopal’s Technical Director, the surrounding forest becomes just as much a part of the 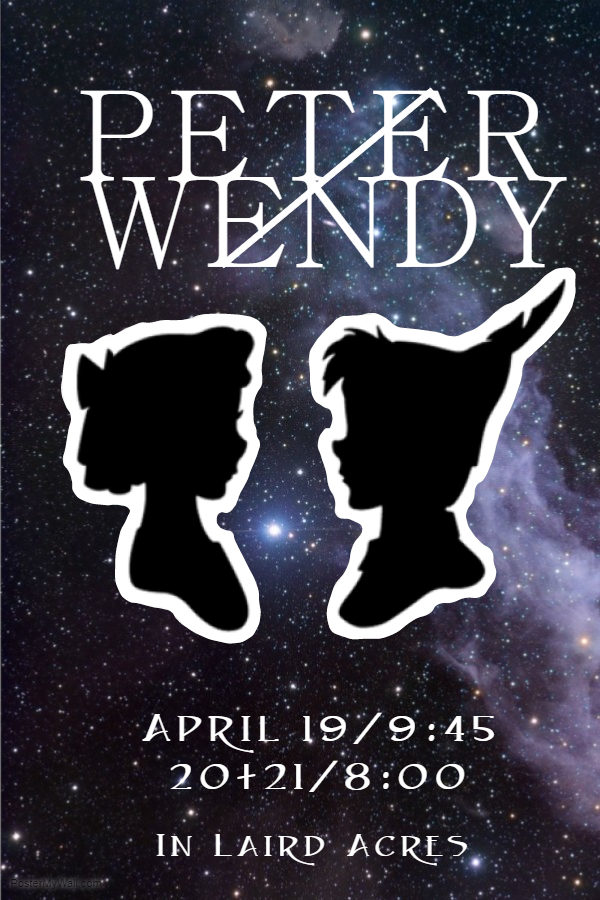 show as the actors. Entrances and exits happen from all sides, not just the traditional stage left and right. Actors can be seen up in the trees, and hidden all around them. Directed by Mr. Bill Patti the show finds a way to merge components of the classic story with new elements never seen on an Episcopal stage, or lack thereof. Senior Gray Goodwyn who plays Mr. Darling says, “It’s been really cool to rehearse every day out in the woods. It’s definitely been a challenge for us in terms of projection, and being loud enough. However, having a change of scenery has been interesting.”

With only five weeks of rehearsal time the whole cast and crew have been diligently preparing for an audience. Spring is the shortest of the three theater seasons so no time was wasted. Once the show was cast it was a quick turnaround for the cast to have all their lines and blocking memorized, while the tech crew was busy building the set and preparing the lights. Those five weeks have flown by, and the whole cast can’t wait to get this show in front an audience. Come see Peter/ Wendy this Friday and Saturday at 8pm in Laird Acres. It’s an adventure you’ll never forget!