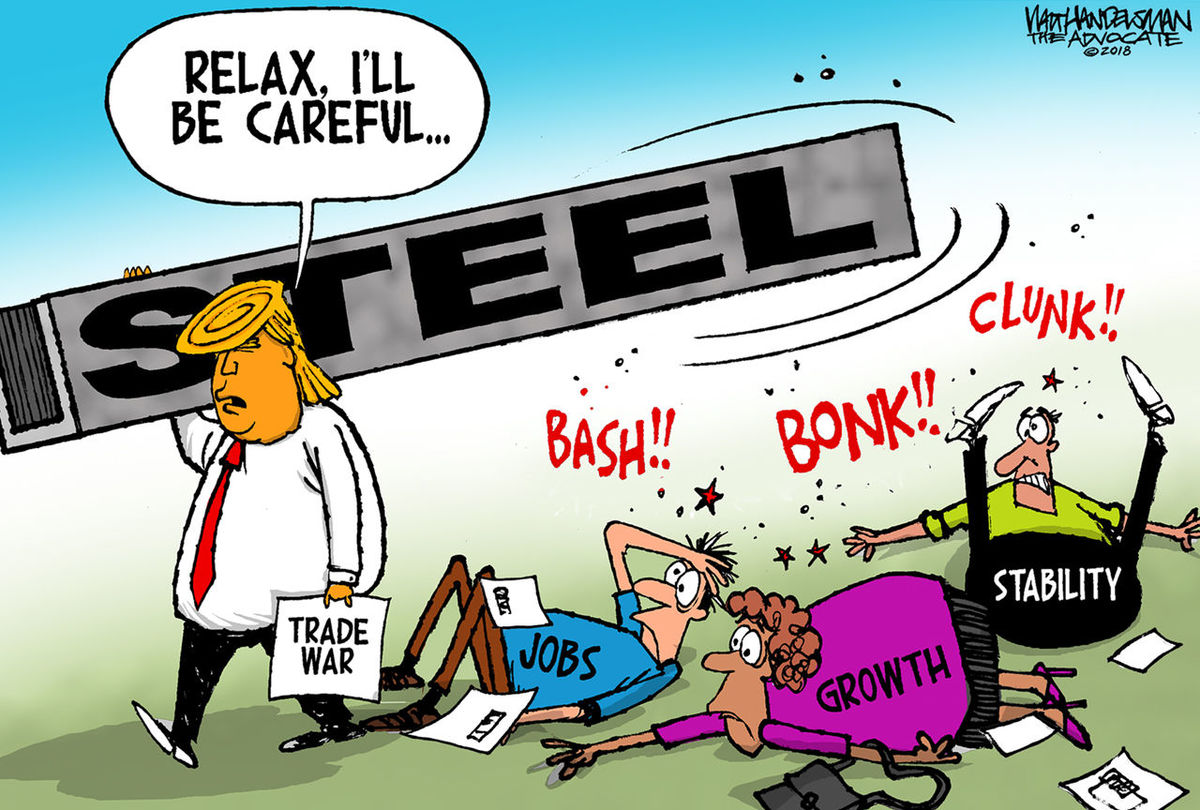 Much in the news lately have revolved around the possibility of a trade war between the United States and China. The series of tariffs started initially with President Trump’s campaign promise to bring more jobs back to the U.S., especially within the steel industry, and his overall attitude of “America First.” Thus, in January, the U.S. announced a 30% tariff on solar panels and 20% on washing machines imported from China. In March, the U.S. announced a 25% tariff on steel and 10% on aluminum. In  April, China retaliated with a 15% tariff on fruits, nuts and wine, 25% on pork, 25% on soybeans, and other tariffs on cars and airplanes. (By the time this article was written, China and the U.S. have announced tariffs on more than $100 billion worth of trading goods.)

The current tariffs negatively impact European car makers, international suppliers such as Boeing, American farmers, and Chinese and American consumers due to higher prices. The minority who would benefit from the tariffs are Latin American farmers, since they are the second largest agricultural exporter to China after the U.S.

Senior Stuart Thornton, a student expert on American agriculture says, “American Agriculture is dependent on exports to keep prices for farmers at a break-even level. The protectionist policies of the current administration have created stress in the Agricultural industry at a time of already low commodity prices. To give some perspective, 30% of America’s largest crop this year, soybeans, are exported to China and the announced 25% tariff on soybeans will cause Chinese importers to spurn American soybeans and buy more from South America.”

One important aspect of the issue is that a trade war between the U.S. and China does not only affect the two countries – it impacts the entire world. Chinese exports are not entirely from China, because on average, 1/3 of the materials and resources constituting Chinese exports come from other countries such as Australia, Brazil, India, Iran, South Africa and Ukraine. Therefore, the eruption of a trade war between the two biggest economic powers in the world would not serve anyone any good.

Another interesting aspect of this dire situation is that President Trump and Congress are now looking back to the Trans-Pacific-Partnership, which the administration backed out of in the first few days of Trump’s presidency. Even though the initial concern about the TPP was that it would not benefit America’s domestic industries enough, re-entering this deal would give the U.S. more leverage in negotiating with China in the future. In addition, Trump is also promising that the renegotiated TPP’s terms would benefit America more than the original terms agreed upon by President Obama.

As Dr. Miller explains, “Trump thinks China will negotiate to avoid a trade war.  I don’t think that will work, and if Trump persists we will end up in a trade war. I do not believe that threats like a trade war are productive in international relations.” In fact, the potential of a trade war has different political impacts in China and the United States. With the upcoming midterm elections in November, the domestic economic impact of the tariffs could truly harm the Republicans. Whereas in China, there is no immediate political impact of an economic decision due to the undemocratic nature of its government.

Politico writes, “[The tariffs] interfere with one of the fastest-growing import and export markets in the world for the United States without generating nearly enough actual revenue to make a difference except to the already vulnerable domestic American industries and consumers that are purportedly protected.” The ultimate goal for both China and the U.S. should be to attain a peaceful compromise, instead of harming this 40-yearlong diplomatic and mutualistic relationship.