Have you ever met a TV star? I assume a majority of your responses will range anywhere from “well one time I saw (insert name) crossing the street in New York…” to “God, I wish…” However, what you may not know is that you are currently living in the presence of one. Yup, you heard me. Senior Maddy Warrell, or should I say “Madelyn Warrell” as IMDb lists her, starred in the Australian television series, Ja’mie: Private School Girl, as protagonist Ja’mie King’s little sister. Crazy, right?

I’m sure you may all be wondering, how on earth did she decide to come to EHS?! Her answer is far different than any response I’ve ever heard: “Moving to Episcopal was pretty much me deciding to give up tv acting.” Now that’s not something you hear every day. To provide a little context to her decision, Maddy auditioned for her role in Ja’mie: Private School Girl when she was twelve years old. She says that the audition basically consisted of her saying a bunch of swear words. They told her she’d hear back in two weeks. Two months passed, and she thought it was a lost cause, but the agency called and said she had 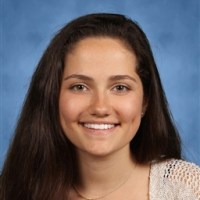 received the part. She appeared to be the only little girl that felt comfortable enough dropping the f-bomb every five seconds. “It really didn’t bother me,” she said. From that moment on, she spent a majority of her time in between school and set. After the show finished up, she received offers to leave school and join the business as a full time actress. Maddy, however, didn’t want to do homeschooling. It was her rejection of this offer—one that would take major compromise and commitment— that brought Maddy to EHS.

Aside from her distinguished talents in the arts, Maddy’s Australian accent is almost impossible to miss. She was born in Adelaide, Australia, then moved to Dallas, TX, at the age of three, and then to McLean, VA, only to end up back in Australia when she was eleven. All of this traveling was due to her dad’s job (her family is now in Singapore!), but she, along with her three brothers, spent a good four years in the Outback. Maddy claims that when they moved back, she acquired the accent and really got a feel for what it was like to be an Australian: “The culture is very laid back and self-deprecating. No one is really allowed to think they’re any better than anyone else without making some jokes about themselves along the way. It’s a very beach-oriented culture, so you spend your summers in the water. I miss it a lot.”

Along with the obvious, acting, Maddy also loves singing and writing. She runs the Chronicle with Mady Hand and John Woodward and serves as a member of the Daemon. After dabbling in sports with two seasons of track and one of cross training, her five seasons of theater and participation in all three choirs: Concert Choir, Episcopellas, and Chamber Choir, speak true to her admiration of the arts.

Next year, sadly, we will say goodbye to Maddy as she heads off to Bernard College in NYC; she will be studying Political Science and English with a focus on screenwriting. Her current path, along with her aspirations that range anywhere from writing for tv shows like SNL to hosting a late night talk show, allow us to expect nothing less than success for Maddy’s future. With only two months left until graduation, Maddy leaves us with her final thoughts regarding her departure from the Holy Hill: “I love EHS, and it is going to be pretty bittersweet on graduation day. I love how this school is constantly evolving while sticking to its core values. For the evolving part, the theater department has grown so much since I’ve been here. And for constants, the school is such a familial community. The faculty kids are always an amazing mood lifter, and there are just so many people looking out for you whether you know it or not. It will be a little scary leaving the safety of the Holy Hill and heading out into the world, but I think my time here has prepared me pretty well for what’s ahead.”