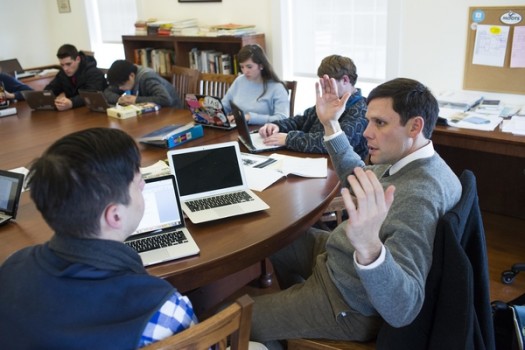 Sunday evening, the History Department held their third Lyceum, an initiative launched to help educate our student body on relevant issues that demand (but sometimes don’t receive) their deserved attention. Sunday’s host was Mr. Goodnow, our local expert on all things pertaining to politics and the upcoming election. Nearly fifty students attended, of their own free will, to learn about the Iowa caucus and all kinds of beurocratic hubjub that is currently inspiring heated dining room table debates in our homes. Once seated, a projector cast a PowerPoint on the wall, titled, “2016 Election by the Numbers”, and Mr. Goodnow explained the significance of a handful of statistics.

A series of critical questions were addressed. For example, in a country with 300 million citizens, why are 50 thousand primarily elderly, white Iowans being gaged as an accurate representation of the voting trends of the entire nation? Not to dismiss the great plain state, but like seriously, why?

And why does it seem like this election has been going on forever? It’s in our Twitter feeds, on our Facebook pages, we all have that ardent political friend who uses Facebook as an outlet from which to rant about election drama. While we might block their posts, we can’t deny that social media and the press has made the election accessible to the world, one no longer needs to take great pains to stay updated.

Perhaps it’s the dramatic candidates that are getting the election so much press, polarizing the parties and threatening people to have to choose between extremes. It seems like just yesterday, Bernie Sanders was a Vermont governor with socialist sympathies, and now he’s likely to appear on our ballots.  Donald Trump was a real estate mogul with a reality TV show and now he’s first in the polls, his “Make America Great Again” merchandise outfitting frat brothers everywhere.

My favorite quote relating to Trump was one by a Hispanic friend of mine, who said, “I’d like to see Trump in office, but I think I’d get deported first.” candidates like Donald Trump and Bernie Sanders have polarized the parties. Whether it’s Sanders or Trump in question, all parties agree that if either end up in office, the Founding Fathers will turn in their graves.

But hark! Not to fear! Bloomberg, beloved ex-mayor of New York, promises to fund his own campaign as a third party moderate candidate if these unlikely things come to pass, so you can all stop scoping out real estate in Australia.

This Lyceum was interesting as well as informative. For seniors especially, who will be eligible to participate in the upcoming election, it’s important that we get the facts so we can make rationally informed decisions about political moves that will impact our futures. #supportthehistorydepartment #getthefacts!